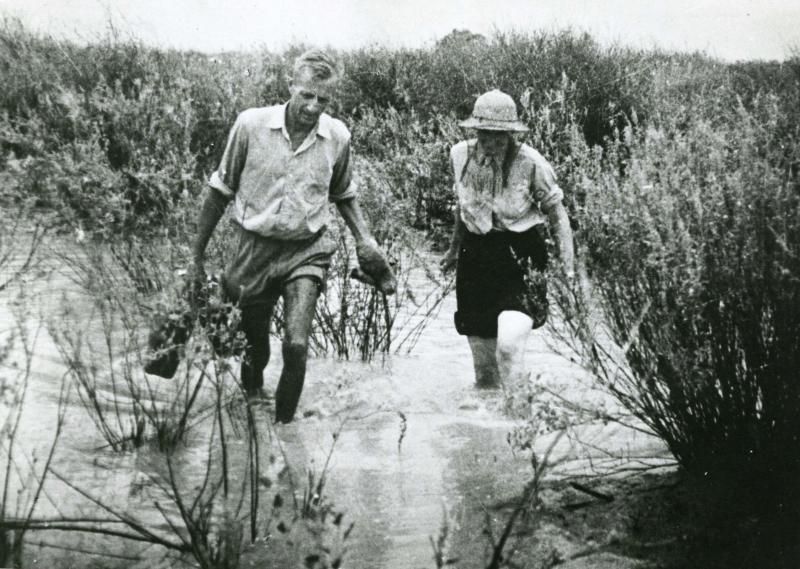 Flying doctor Allan Woods and Sister Myra Blanch, from Broken Hill base, making their way from plane to patient, through the mosquito infested flood waters of Cooper's Creek, in south-west Queensland, 1945 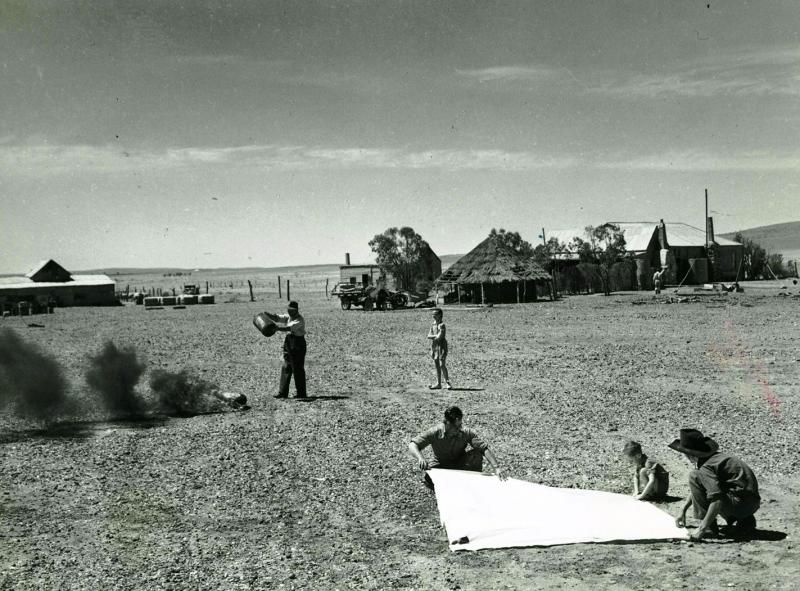 Panic at the 'The Veldt' sheep station, NSW, 1948: Sheets are being laid to mark the landing strip, and flares lit to show wind direction, in preparation for the arrival of the flying doctor aircraft bringing Dr Scott Kennedy to attend to sick daughter, Judith Barlow 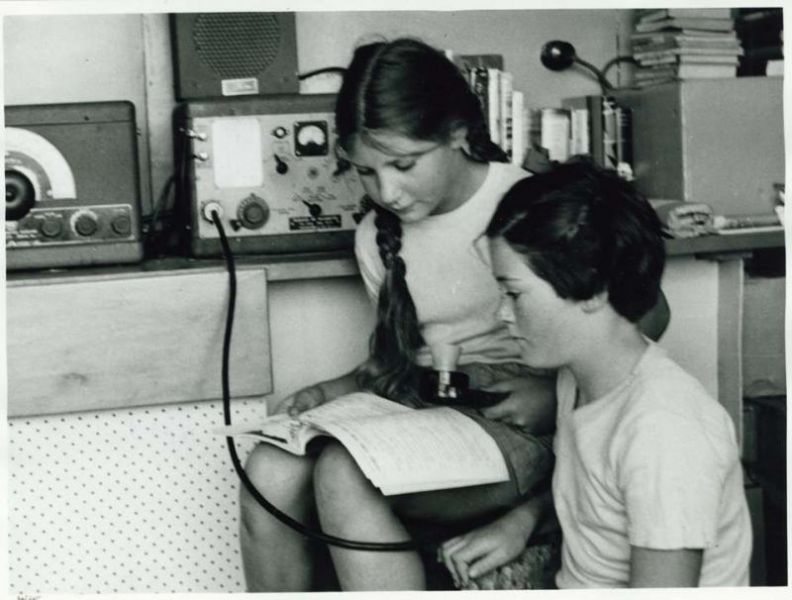 The Royal Flying Doctor Service was created by John Flynn to bring medical care to people living in remote areas where there were no doctors, nurses, or hospitals to help them if they fell ill or were injured.

It was a complex and difficult task. Nobody believed it could be done. The people of the outback were widely scattered over a very large area. The outback lacked infrastructure like roads, transport, power supply to advance such an enterprise. Also lacking was the money with which to set it up.

But John Flynn was determined. With a team of committed co-workers, he managed, after many years of planning, persuading, and campaigning, to bring an aerial medical service to the outback, and also to set up a radio network.

The service started with one flying doctor, one plane, one pilot in 1928, and gradually developed to became the Royal Flying Doctor Service of today.

On the left of the note is the first flying doctor plane, called Victory, a tiny de Havilland biplane, made of wood and canvas. The first medical flight was in May 1928, when pilot Arthur Affleck took the first flying doctor, Kenyon St Vincent Welch, from Cloncurry to Julia Creek nursing centre, 135 km away.

Below the plane are the pedals of a special pedal-powered radio, developed by Alfred Traeger in 1929, to give people of the outback a way of calling for the flying doctor.

Next to the pedals is the Body Chart, which could be used by patients, when they talked to the doctor on radio or phone, to describe in which part of the body their pain or injury was located.

On the right is one of the padres recruited by Flynn to visit isolated homesteads and offer help and companionship. 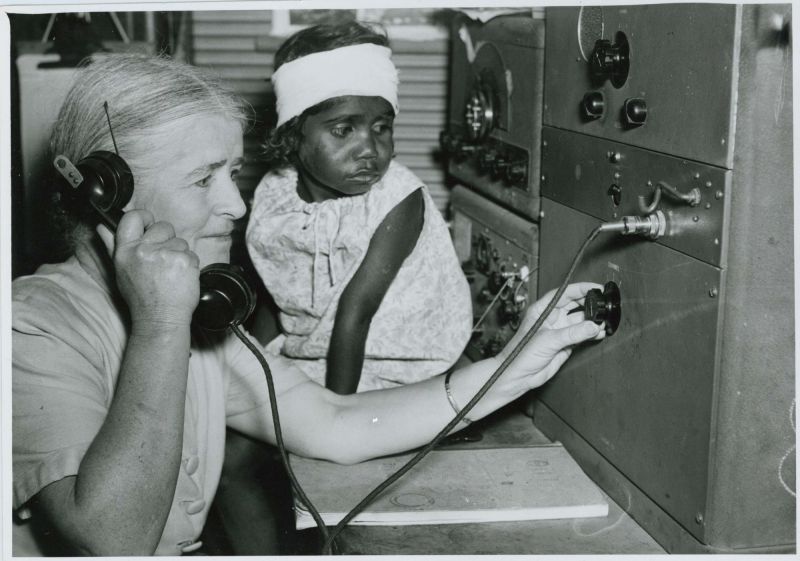 Emergency at Mornington Island Mission, in the Gulf of Carpentaria: Sister Creach uses the radio to seek advice from the flying doctor, 1955. Monthly clinic runs to the Mission began around this time, after flying doctor Timothy O'Leary, from Charters Towers base, noted that there was no regular medical care for communities in the Gulf area. 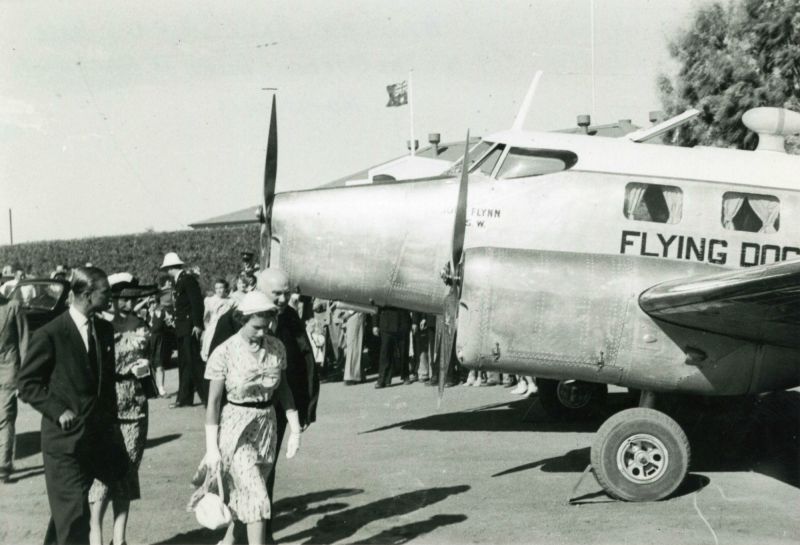 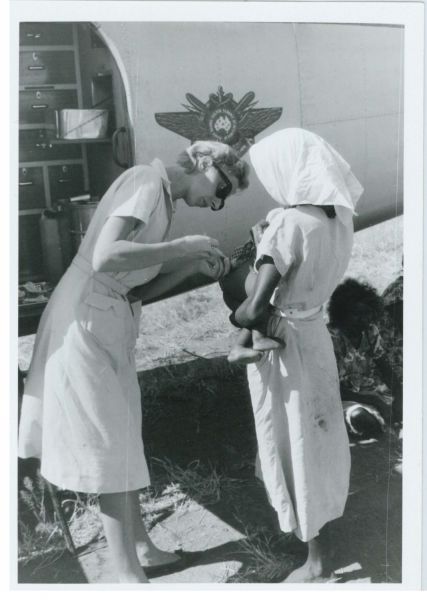 RFDS bringing the miracle Salk vaccine to the Kimberley, 1960: In the 1930s, 40s, and 50s, polio epidemics swept through Australia, leaving a trail of ruined lives - children crippled by the disease, unable to walk, unable to move their arms, lying paralysed in iron lungs, or worse. The introduction of immunisation by Salk vaccine in 1956, and later the Sabin oral vaccine, brought an end to this dreaded disease in Australia. 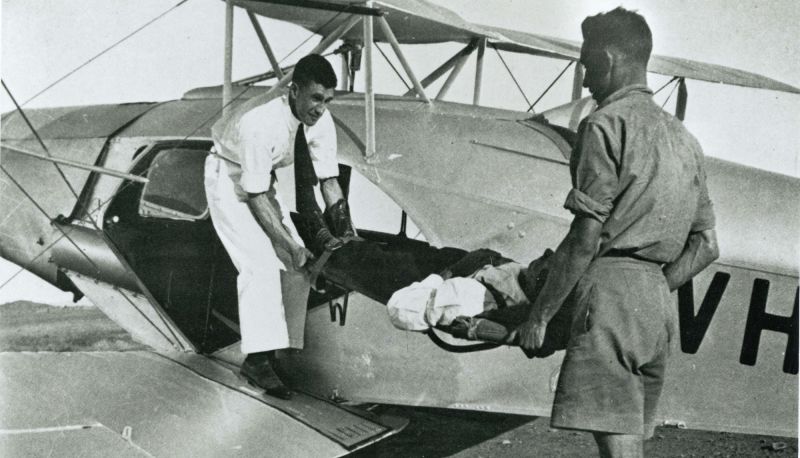 Doctor and pilot loading patient onto the Fox Moth aircraft from Wyndham base 1935: Wyndham base was the second flying doctor base to be established, for here, on the northernmost tip of Western Australia, were cattle stations and meat works and a bustling community greatly in need of medical facilities. In the same year a base was set up at Port Hedland and by the end of the 1930s there were six flying doctor bases around Australia.The Wyndham meat works closed in 1985, and the base closed in 1989. Wyndham is now a much less bustling township with a population of 1000. But there are still pastoral stations in the area, and cattle are still shipped from the port. 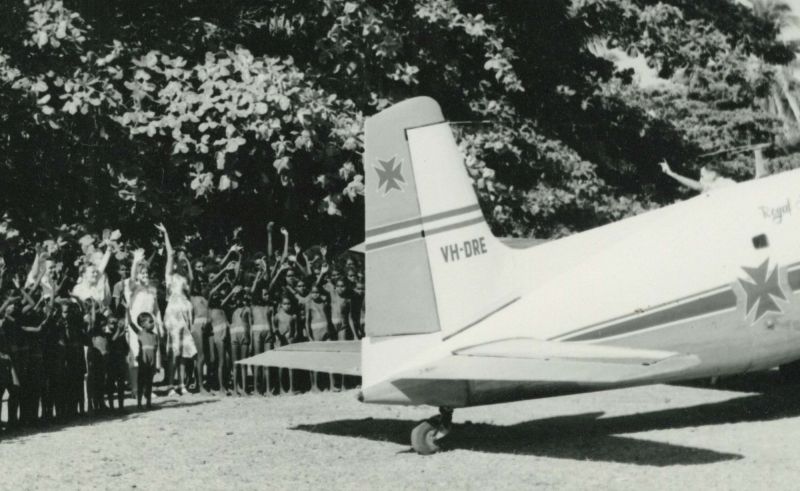 Children of Aurukun Misson wave goodbye to the Flying Doctor at the end of a clinic visit, 1952. This was a time (since the establishment of the State Protection Boards in the 1800s) when Aborigines were largely restricted to living on church missions, on pastoral stations, or on specially set-aside reserves. 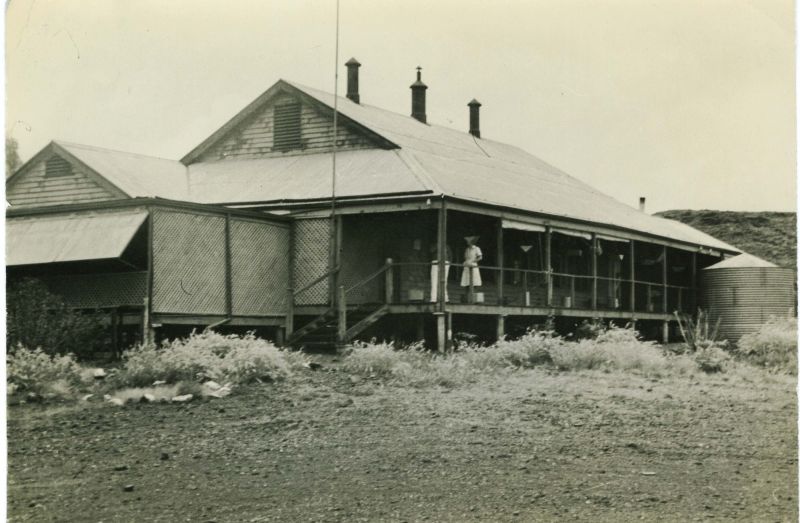 The nurses: Sixteen years before he brought the first flying doctor to the outback, Flynn started to lay the foundations of his medical scheme by setting up hospitals and bringing out nurses to care for the people in the surrounding areas. The first hospitals were primitive buildings situated in isolated locations, the medicine supply was meagre, and the nurses had no way of getting advice from faraway city doctors. They nevertheless managed to deal with a variety of medical afflictions, often serious, like malaria, snake bite, and gun-shot wounds. 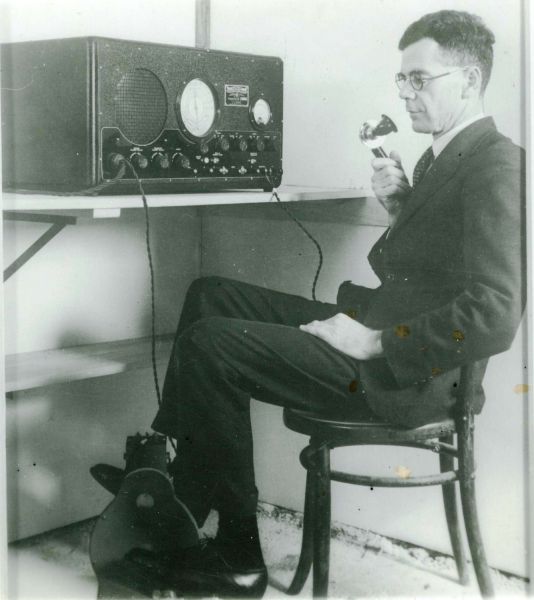 Communicating in the outback : In the late 1920s skilled engineer Alfred Traeger worked out a way for people who lived in remote areas, where there was no power supply and no telephone service, to get in touch with the flying doctor when they needed medical help. Traeger developed a radio set that did not need to be 'plugged in'. The set was fitted with bicycle pedals, and when the pedals were turned, enough power was generated for messages to be sent and received. At first these sets could only send messages in Morse code, which was difficult to use. Later, Traeger adapted the sets so that spoken messages could be sent. The pedal set not only enabled people to call for the doctor, but also gave a way for people to talk to each other, order supplies, carry out business, get weather reports. Later the set was used to deliver education through School of the Air. 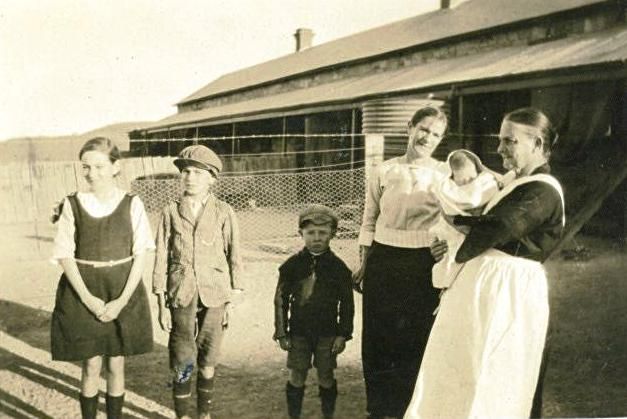 Bush family: In the early days, there were few non-indigenous women and children in the outback. Men mainly came out alone, their families remaining in the cities. Life in the remote bush was harsh and difficult: there were none of the comforts of the city, like roads, transport, schools, there were no shops for buying food, medicine or other household supplies, no telephone or other means of communication, and it was very lonely - the nearest neighbour could be many miles away. Most discouraging of all was the absence of doctors or other medical care that could be turned to in case of illness or injury. The coming of the flying doctor and radio communication significantly changed this. It transformed life in the outback. It modified its precariousness and isolation. It took away the fear of being stranded with no help. It enabled women and children to come to the outback. 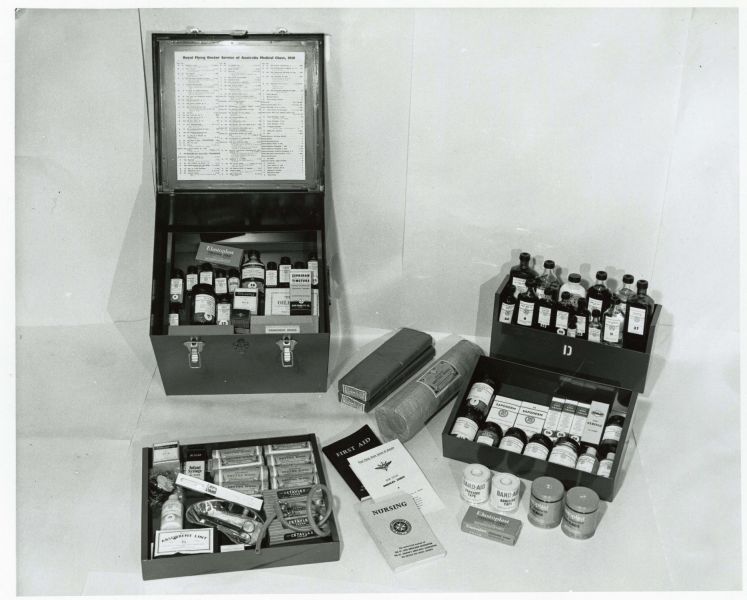 RFDS Medical Chests were first distributed in 1942 to provide medicine and first aid items to communities living in areas where there were no chemist shops or other source of medication. The chests were strictly controlled by someone elected as ‘custodian’, and always used under doctor’s orders, usually during consultation via radio or phone.

Medical chests are still used in the outback today, for there are still many remote areas where medicines are not available. They look much the same as the old chests, but contain different items. They are held in homesteads, on pastoral stations, mining sites, and in places like schools, police stations, hotels. 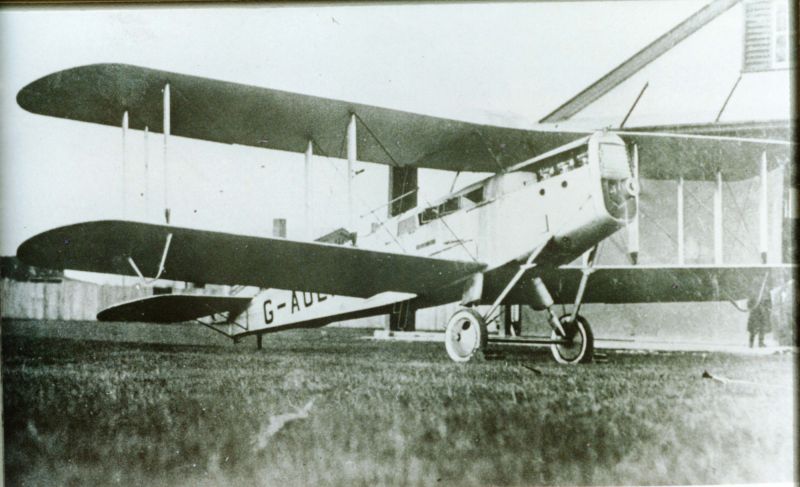 Travel in the outback: In the early 1900s, travel in Australia was on horseback or by horse-drawn wagon, on camel, coastal boat, ferry, or train. Shorter distances could be covered by bicycle, or on foot

At the end of WWI, there was a focus on adapting the plane technology that had fast developed during wartime, to peacetime use, and in the 1920s mail and passenger airlines began to spring up in Australia.

Qantas was among the first of the new passenger companies, and it was to Qantas that Flynn turned for a plane for his aerial medical service.

The first flying doctor plane was a de Havilland DH50, hired from Qantas at 2/- a mile. It had a cabin large enough to fit a patient on a stretcher, with the doctor sitting alongside. The pilot, though, sat outside in the cockpit, unprotected from the elements and the noise of the engine, and found his way by following rail tracks, rivers, and such, because the plane had no instruments to help navigation. 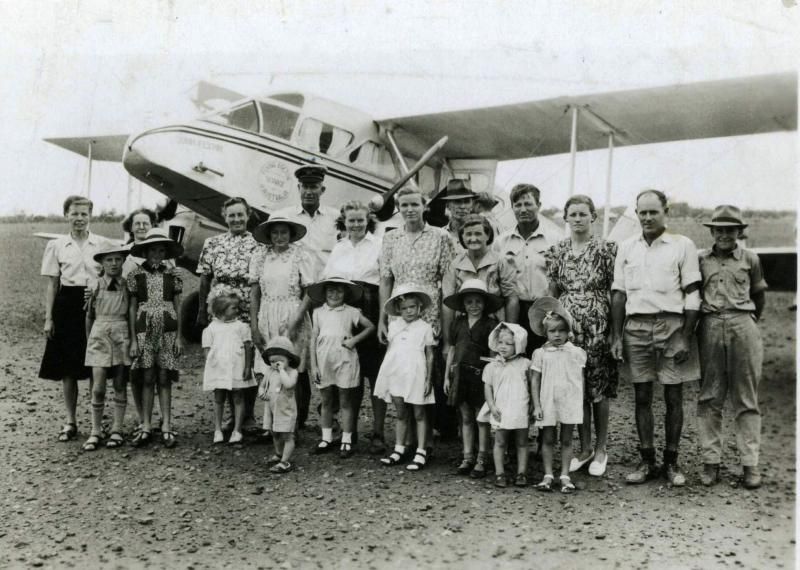 Thargomindah, Queensland, 1940: Flying doctor aircraft were not only used for emergencies. This Dragon aircraft is taking children from outback Thargomindah to Brisbane, under the Queensland Bush Children's Health Scheme. This scheme was set up in 1935, by the Governor of Queenland. It offered fun activities for bush children, like holidays by the sea. It also offered not such fun things, like trips to the dentist. The scheme still operates today, under a new, more trendy, name: 'BUSHkids'.